Free Priority Shipping On Domestic US Orders Above $50

Love this bag!! Been using for a bit. I have zero complaints! Very well made and fill opinions are awesome! I also have a Charlie bag which is amazing as well. Thank you for great gear! Keep up the awesome work!! God bless!!

I am just getting into PRS and after a lot of reviews I chose this bag as my go to bag! Thank you

Love it. Very usable as a rear squeeze bag as well. This and a bipod will cover any situation.

Bag is very stable and locks the gun right in. Terrific bag.

Works great for all positional barricades. With the easy fill and multiple fill options it’s very easy to get what you want. The rubber surface really grabs the gun and barricade.

Works great for a rear bag and is easily manipulated into position. The rubber surface really grabs the gun and shooting surface.

This bag sticks to everything! great bag, better customer service.

I was given this rest last deer season to use and loved it. Made well and is versatile for different set ups, especially in a deer stand hung over a window. It is alittle on the expensive side but you definitely get what you pay for.

Love this bag. Sticks to anything or slope. Works great as rear too.

#1 Built in the USA!!!!
Bag is built really well, longevity isn’t going to be an issue.
Tough yet comfortable material, excellent stability to increase performance!!!!

The best customer service! The Gecko II is By far the best bag for PRS style shooting. Paired with the rear Charlie you can’t go wrong and will be amazed how well the bags grip and lock. Conforms and is solid locking on many different surfaces. Quality sewn and made. An excellent Made in America product!

I spent a great deal of my early adult life jumping out of perfectly good airplanes (yeah, I know). I became a rigger to ensure the safety and function of equipment. I recognize top quality materials and workmanship. Excellent bag!

I like the bag so far. I’ve shot one match with it and some range days.Well made and performs as expected.

I love my bag and on varmint hunting trips my father-in-law now has a serious affinity as well. The second bag I get will be a clone of my bag with his initials on it. Great bag, great service and I can’t think of a better compliment than buy two.
Cheers,
RD

I’m super new to PRS shooting and when attending a recent range day, I asked if anyone had a bag I could test drive for the day. A Gecko II was loaned to me and through the day of shooting, the bag sold itself. There was something about the Elite Fill that just seemed to nestle the rifle the perfect amount and keep it locked in position. Not everyone likes the feel of the Elite Fill, but if you like it, you love it. Running my first ever PRS barricade that day was almost too easy. I set the bag down, set the rifle on top of it, and nothing moved when I went to pull the trigger. I cleaned the barricade eight for eight multiple times. I think the biggest thing for me was when we had a little fun and shot at 850 yard steel off a standing barricade. The bag performed flawlessly, and I made good hits where I would’ve previously thought impossible. The design is completely thought out and the designer is always looking for feedback and ways to improve the product. I bought a Gecko II that same day, I didn’t even want to try any other bag.

Let me begin by saying I paid full retail for my Gecko II bag. It was not discounted or given to me, this review is of my own accord. I have used this bag for just under a year and besides my rifle and ammunition, this thing comes with me everywhere. I've used this bag at PRS matches, big game and countless predator hunts. There's plenty of surface area to stack on a barricade, tripod, or any other implement you would use to create a stable shooting position. It has held up to the elements. This bag has been rock solid. I have had no issue shooting off of angled surfaces whether it be glass, wood, rails, vehicles etc. It works as a phenomenal rear back as well. The standard fill has held up it and did not take very long to break in. Black Branch's customer service has been elite. I am still an extremely happy customer with my purchase and with these fine folks. Cheers! ~RM

B
Rear Bag Charlie - Coyote ToughTek Bryan Lane
I only wish you made more stuff.

What a difference it's made, it's really night & day. The first photo is the target the round prior to getting your bag, the second is the first time out with your bag. Both were shot the same way, 3 rounds each around the outside, then 8 rounds at the middle target, for a total of 20 rounds. Absolutely fantastic product & super well made. And by the way, I noticed you were up late that night sending it out, I got it in two days! Unbelievable customer service & you should be commended for it. I only wish ya made more stuff. 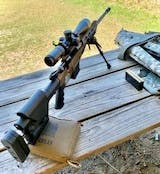 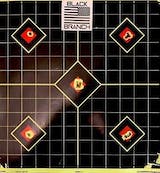 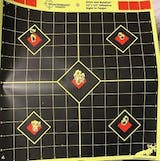 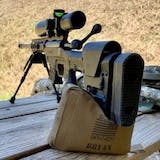 I wanted to take a minute to let you know. The first time I came across this product I was with a few friends shooting precision rifles, after a few hours of working my a** off trying to keep this heavy rifle steady to place a good shot. I switched shooting posts with a friend and he left his bag on the bench, so I gave it a try and holy crap! These guys were cheating all along! Suddenly I could place round after round in the same hole with ease! I had to add one to my collection! I tried ordering online but had a hiccup with PayPal so I called Mike up and placed it over the phone; the owner answered the call himself (awesome). Mike upgraded my order for the inconvenience. I received my bag in 2 days. This company is of the highest quality product backed by killer customer service! Five stars for these guys! Place your order with confidence- this is the bag!

As far as the bag, I like it very much; it is pliable and light weight. We had it with us during hunting. Not light enough however to take on sheep hunts, but it was not meant for that. I don't have any actual action photos because in the heat of the moment, taking pictures is not on your mind. I like the versatility of it. There are numerous heights/positions it can be deployed. Example: In a kneeling position it works great to get more elevation by putting the bag between your elbow and your knee. This is helpful to get above tall vegetation. I would classify this bag as a medium duty shooting bag most suitable for light to medium weight rifles. I used the bag at the gun range with a heavy 50 BMG but it's a strain on the bag. The stitching is pulled tight with guns like that. Found an anti-slip surface very useful, however at around 20 deg F the cold temperature on windshield has an effect on the stickiness. So all in all I found it a positive product. A few people played with it and liked it. Most excellent service for sure. 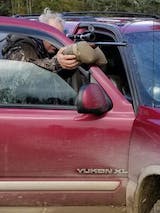 Just wanted to take a moment to comment on your Gecko II bag that I received. I've been in this long range/PRS style shooting game since late 2009/early 2010. I've had/tried just about every bag made. Triad, TAB, Weibad (I was using David's bags before anyone knew who Weibad was), Armageddon Gear, Reasor Game Changer, Str8 Laced, various Cookie bags, etc. I have to say I'm very pleased with your bag. After spending the day testing it out, especially on top of a RRS tripod, it's my new go to bag for competition, as well as most of my hunting. I did some testing with it on top of RRS tripod doing some free recoil 1000yd shots. It was rock solid. I'm going to be sure and let my shooting partners and friends use it as well. I'm sure they will be just as impressed. I didn't even know you or your bag existed until I came across a thread on Snipershide with someone asking about the Gecko II and how it compared to others. Anyway, just wanted to let you know your product was nice and I'm happy to have it. Take care, Trevor Allen

Being new to PRS and NRL22 series shooting I wasn't sure what all I even needed, so I did a lot of research and ended up ordering a gecko II & an alpha bag. The tacky material helped make up my mind. Love them both, especially the alpha pillow bag, great for filling voids, no buckles or anything to poke you, I actually use this a lot for a front bag. Sometimes you need extra height, so turn it on it's end. Or leave it flat strap it easily & quickly to your rifle and it's a super steady front rest; it's so wide the rifle is real steady on it. Need it off during a stage? Pull the Velcro straps & in about 2 seconds your rifles clean. And it's extremely light. Thinking of ordering a 2nd one for times when I need it as a front bag & a space bag. 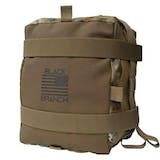